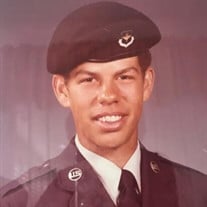 The Green family is saddened to announce the departure of their beloved son, brother, husband and uncle Anthony François Green, age 60, of Brackettville, Texas. Tony passed away on Monday, February 7th, 2022, after a brief illness. Tony was born on June 26th, 1961 in Paris, France. Always passionate about the military, Tony joined the Air Force right out of high school, beginning his military career as a member of the Air Force Security Police. He served tours of duty in Germany and Minot Air Force Base, North Dakota and Kunsan Korea. Tony eventually retired from the military and married Lorinda Vega, becoming the proud stepfather to Larry and Valerie. He was doting grandpa to Evey and Larry Jr. Tony spent his early retirement years playing a major role in the lives of his family, spending endless hours babysitting nieces and nephews and teaching them to drive, as well as helping many with disabilities. He was an avid student of computer repair and hoped to one day establish himself as an entrepreneur in that field of business. He also loved animals and always had a cadre of pets at home. The pastime he derived the most joy from, though, was his involvement in the iconic world of Gene Roddenberry’s Star Trek. Tony was a devoted “Klingon,” and an officer in the Klingon community. He reveled in his ability to speak fluent Klingon as well as wearing his full regalia to shows, events, and at Halloween. He would often extend a greeting of “Qapla!” (Success!) when the mood struck. Anyone who knew Tony was touched by his kindness, humor, and friendly outlook on life. He was truly a gentle soul and was always a source of positivity. Tony was devoted to his wife Lorrie, who survives him, as do his parents CW4(Ret)Vernon and Ginette Green, Theodore & Pearl Burke, his siblings Vernell, Ted, Anita, Talia, Brigitte and Teresa, and many cousins, nephews and nieces. He also leaves behind aunts Lisa, Madeleine, Marita, Sheila, Barbara Ann and Hollie Vaughn, and a loving extended family all over the globe. Military Services will be held at Fort Sam Houston, San Antonio Texas on March 10, 2022. In lieu of flowers, the family requests donations be made to the Disabled Veterans at DAV.org. This is an organization Tony felt strongly about. Services are entrusted to Hillcrest Memorial Funeral Home, 424 Geraldine Street, Uvalde, Texas

The Green family is saddened to announce the departure of their beloved son, brother, husband and uncle Anthony François Green, age 60, of Brackettville, Texas. Tony passed away on Monday, February 7th, 2022, after a brief illness. Tony... View Obituary & Service Information

The family of Anthony Green created this Life Tributes page to make it easy to share your memories.

The Green family is saddened to announce the departure of their...

Send flowers to the Green family.