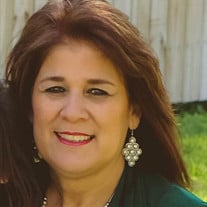 Blanca S. Briones beloved wife, mother, daughter, sister & grandmother, age 59, of Del Rio, Texas passed away on Wednesday, December 22, 2021 surround by her family in San Antonio, Texas. Blanca S. Briones was born on March 2, 1962 in Del Rio, Texas to Felix Sauceda, and Jesusita Puente-Sauceda. She is preceded in death by her loving mother, Jesusita Sauceda. Blanca had many passions in life, one of them her family. Traveling at a young age with her boys to every game and always back in time for Sunday mass at church. Mrs. Briones was very dedicated to the church where she attended many ACTS retreats and taught CCD classes. In her catholic faith, she became a Eucharistic Minister for over 15 years an honor that she took very seriously. Blanca attended 6:00AM mass daily and never missed an opportunity to share the word of God with anyone who would listen. Later, Mrs. Briones was honored with another title that almost defined her completely, Grandmother. Grandma Blanca spent every minute possible with her grand babies. She loved babysitting and would often ask for her family to gather at her ranch to share the principles of fellowship and love with one another. To say that Blanca had only 3 boys would be incorrect, she cherished all her nieces and nephews just as her own. She often scolded them with a light velvet touch as only a women of God could, then with a big smile would warm the entire room. Mrs. Briones was raised to be a hard worker, so it was only fitting when she began college that she would not give up until she finished even if she was raising 3 boys and working full time. She would often have to take just one class at a time and would have to skip semesters because one if not both Jaime & Javier would be in the football playoffs and she had to make it. Her hard work however, paid off when she received a Bachelors of Phycology from Sul Ross State University. Blanca never met anyone who she didn’t pray for or become her friend and she always tried to give a word of encouragement. Mrs. Briones will be missed most by her loving husband of 40 years, Baldemar Briones of Del Rio, Texas sons; Baldemar (Martha) Briones of Del Rio, Texas, Javier Felix (Macy) Briones of Uvalde, Texas, Jaime Alonzo (MaryAnn) Briones of Del Rio, Texas brothers; Florencio (Margaret) Sauceda of Beaver, Utah Felix P. (Linda) Sauceda of Del Rio, Texas Armando (Elsa) Sauceda of San Antonio, Texas Mario Sauceda of Del Rio, Texas grandchildren; Abrianna Briones, Anici Briones, Myrella Briones, Camilla Briones, Analis Briones, Amelia Briones, Liam Briones, Liliana Briones and Jaime Briones Jr.. Gentleman serving as pallbearers; Baldemar Briones Jr. of Del Rio, Texas, Jaime Alonzo Briones of Del Rio, Texas, Javier Felix Briones of Uvalde, Texas, Armando Sauceda of Del Rio, Texas, LeRoy Briones of Del Rio, Texas, Felix Sauceda III of Del Rio, Texas, Edward Sauceda of Del Rio, Texas, David F. Sauceda of Beaver, Utah Michael J. Sauceda of Corpus Christi, Texas A Visitation will be held, Sunday, December 26, 2021 from 4:00 P.M. to 9:00 P.M. at Sacred Heart Catholic Church, 307 East Losoya Street, Del Rio, Texas A recitation of the Holy Rosary will also be held Sunday, December 26, 2021 7:00 P.M. at Sacred Heart Catholic Church, 307 East Losoya Street, Del Rio, Texas A Mass of Christian Burial will follow at 10:00 A.M. Monday, December 27, 2021 at Sacred Heart Catholic Church, 307 East Losoya Street, Del Rio, Texas. Interment to follow at Sunset Memorial Oaks Cemetery, Hwy 90 East, Del Rio, Texas Services are entrusted to Hillcrest Memorial Funeral Home, 424 Geraldine Street, Uvalde, Texas

The family of Blanca S. Briones created this Life Tributes page to make it easy to share your memories.

Send flowers to the Briones family.