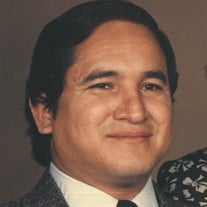 Robert, 69 of Uvalde, passed away peacefully into eternal rest, Tuesday, March 29, 2022, at Regent Care Center in San Antonio. He was born April 18, 1952 to Ines Reyes and Amalia Valle Reyes. He was preceded in death by his parents, and son Ines Roberto Reyes, Jr. The biggest love of his life was his wife Martha of 47 years, his sons Rafael and Stefan Reyes, and grandchildren Ian and Danae Reyes. He is also survived by sister Rosalinda Arredondo, brother Rolando (Celia) Reyes of Uvalde, and numerous nieces and nephews who will miss him dearly. Robert graduated from Uvalde High School in 1971 and from SWTJC before transferring to UT Austin to pursue a business degree. While at UT, he co-founded the UT Hispanic Business Student Association. Additionally, he joined the Big Brothers of Austin mentoring youths. In 1975, Robert took a break from his studies when he was offered employment as a Work Scheduling Specialist with HEB traveling to surrounding stores training other employees. Robert was a devoted husband, father, and son. In 1979, he and his family returned to Uvalde. He joined The Optimist Club as a member and later served as president. He taught CCD classes to students for a number of years, and coached in his kids soccer teams. In 1982, Robert enrolled at UTSA to complete his college degree. After operating his own medical supplies store, he was hired by a national company and later earned an Assistive Technology Professional certificate to repair and customize wheelchairs for patients. The family wishes to extend their sincere thanks to the doctors and nurses at Main Methodist, Regent Care Center and to VITAS Hospice, Father Ken & Father Eddie, and to all others who stood by them during Robert’s illness in the many ways especially in prayers. A Mass of Christian Burial will be held at 10:00 A.M. Friday, April 22, 2022 at Sacred Heart Catholic Church in Uvalde. Internment to follow.

Robert, 69 of Uvalde, passed away peacefully into eternal rest, Tuesday, March 29, 2022, at Regent Care Center in San Antonio. He was born April 18, 1952 to Ines Reyes and Amalia Valle Reyes. He was preceded in death by his parents, and son... View Obituary & Service Information

The family of Ines Roberto "Robert" Reyes Sr. created this Life Tributes page to make it easy to share your memories.

Robert, 69 of Uvalde, passed away peacefully into eternal rest,...

Send flowers to the Reyes family.