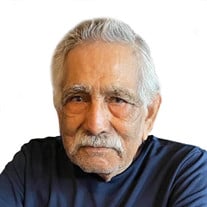 Juan Luera Luna Sr., 79, of Batesville died on Dec. 18, 2021, at Uvalde Memorial Hospital. Visitation will take place Tuesday, Dec. 21, 2021, from noon to 9 p.m., and a rosary will be recited at 7 p.m., at Hillcrest Memorial Funeral Home, 424 Geraldine St. in Uvalde. Visitation will continue Wednesday from 8:30 a.m. until 1 p.m., at which point the procession will leave the funeral home in route to St. Patrick Catholic Church in Batesville. Mass will be celebrated at 2 p.m. with the Rev. Gustavo Ortega Rodriguez serving as officiant. Masks are required inside the church. Interment will follow at Edgewood-Woodlawn Cemetery in Batesville. He was born on July 16, 1942, in Raymondville, to Joaquina Luera and Gilberto Luna. The family moved to Batesville when he was a child. He married Eugenia Canales on Feb. 7, 1965, at St. Patrick Catholic Church in Batesville. Their 56-year marriage produced five sons and two daughters, plus many grandchildren and great-grandchildren. Luna delighted in seeing his family together, with his teenage grandsons Armando and DJ recalling how excited he was to see them arrive at the family home. He would yell each of their names as he saw them approach the house and used their time together to teach them how to fix anything that was broken and process wild game. Though he loved his grandchildren dearly, they often became too loud for his comfort, especially if wrestling or a beloved western movie was on the television, so he would collect a Halloween mask his youngest son, Peter, left behind and burst into the room to scare them all into being quiet for a while. The quiet rule didn't apply to granddaughter Tatyanna, with whom he encouraged to join him in yelling at the television any night World Wrestling Entertainment programs aired. From his youth and throughout his working years, he was employed as a farmworker or ranch hand, through which he taught his sons the value of hard work. His eldest son, Johnny, recalls Luna taught his sons how to operate a tractor and other farm equipment; plant, tend, and harvest crops; and hunt and fish. He loved to dance and especially enjoyed taking his daughters-in-law and granddaughters out onto the dance floor during birthdays and other celebratory gatherings. His favorite pastimes included hunting, fishing with his brother Chilo, and watching wrestling and western movies. He collected John Deere ball caps, knives, and arrowheads, and he asked anyone heading to the store to bring him back some Grizzly longcut wintergreen chewing tobacco. His grandchildren say they enjoyed the banter between their grandparents when their grandmother would try to watch the news as their grandfather groused about missing a WWE wrestling match, and they will miss his smiles, affectionate nature, and working with him on the yard and other projects around the house. He is survived by his wife, of Batesville; five sons, Juan “Johnny” Luna Jr. and wife, Rosemary, and Daniel “Danny” C. Luna and wife, Criselda, all of Batesville, Ramiro Luna and wife, Brenda, of Dilley, Javiel Luna and wife, Maricella, of Bryan, and Peter “Pete” N. Luna and partner, Meghann D. Garcia, of Uvalde; daughter, Cristina L. Carrillo and husband, Marco, of San Antonio; sister, Eufemia Rios and husband, Cayetano, of Andrews; and sister-in-law, Ernestina Rios. Grandchildren surviving him are Johnny's two sons, David Lee Garza Jr. and Ryan Rene Bustamante Jr.; Ramiro's five sons and two daughters, Ramiro Luna Jr., Isaiah Luna, Jeremiah Luna, Sydney Marie Luna, Eugene Luna, William Alexander Luna, and Danielle Luna; Danny's two daughters and two sons, Crystal Marie Luna, Daniel Luna Jr., Armando Tomás Luna, and Tatyanna Miranda Luna; Peter's daughter, Katelyn Alyssa Saldaña; and Cristina's three sons and three daughters, Natalie (Carrillo) Gusme, Nathan Carrillo, Michael Carrillo, Melanie Ann Carrillo, Giselle Ann Carrillo, and Marcus Anthony Carrillo. He is also survived by 14 great-grandchildren, including Ramiro's nine grandchildren, Peter's grandson, and Cristina's four grandchildren. He was preceded in death by his parents; infant daughter, Belinda Luna; six brothers, Isaac Luna and wife, Francisca, Ventura Luna and wife, Adelida, Domingo Luna and wife, Angelita, Ciriaco Luna and wife, San Juana, Guadalupe Luna and wife, Angelina, and Cirildo Luna; and grandson Juan R. Luna, son of Ramiro. Pallbearers will be his six children, Johnny, Ramiro, Javiel, Danny, Peter and Cristina. Honorary pallbearers were his grandchildren. Interment to follow at Batesville Cemetery, Batesville, Texas. Services are entrusted to Hillcrest Memorial Funeral Home, 424 Geraldine Street, Uvalde, Texas.

The family of Juan L. Luna Sr. created this Life Tributes page to make it easy to share your memories.

Send flowers to the Luna family.