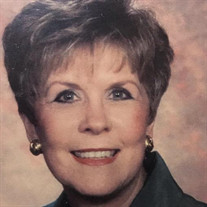 Patricia Ann Woods, age 78, of Brackettville, Texas passed away on Tuesday, November 10, 2020 in her home with her family b her side in Brackettville, Texas. She is preceded in death by both her parent's, George Thomas and Frances Wilkerson. She... View Obituary & Service Information

The family of Patricia Ann Woods created this Life Tributes page to make it easy to share your memories.

Send flowers to the Woods family.