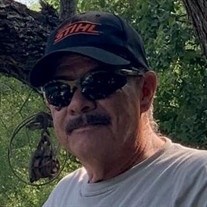 Robert Cano, age 65, of Uvalde, Texas passed away Wednesday, December 11, 2019 in San Antonio, Texas. Robert Cano was born October 26, 1954 in Evanston, Illinois to Daniel Cano and Lupe Garibay-Cano. He is preceded in death by both his parents,... View Obituary & Service Information

The family of Robert Cano created this Life Tributes page to make it easy to share your memories.

Send flowers to the Cano family.